skip to main | skip to sidebar

MARCH 15, 2010
http://www.woonsocketcall.com/content/view/129444/1/
WOONSOCKET — The animal control officer was hospitalized Friday after a pit bull mix that had been sheltered at the pound for some two months without incident suddenly attacked her, officials said.
Animal Control Officer Doris Kay suffered extensive tearing wounds to her left forearm and puncture wounds on her right arm and index finger, said Detective Capt. Edward J. Lee Jr. Citing the severity of the injuries, Lee said Kay was transferred to Rhode Island Hospital for treatment after initially being transported to Landmark Medical Center.
Lee said the police department will conduct an administrative review of the incident to confirm the facts and determine whether new procedures are needed to improve safety. He said Kay is currently on injury leave.
At the time of the incident, Lee said Kay was transferring the dog from one cage to another to accommodate several laborers from the highway department who were doing some painting in the Cumberland Hill Road facility. Initially, the dog seemed to be acting “in a playful manner” but the animal abruptly became aggressive and bit Kay on the left arm for no apparent reason, said Lee.
Kay managed to push the dog away, but he came at her and bit her a second time on the right forearm. Once again, Kay managed to distance herself from the animal, but he made another lunge toward her and bit her left arm again, only this time “he locked on,” said Lee.
Despite the ferocious onslaught, Kay maintained her composure as she calmly instructed one of the highway workers, Hing Sok, to spray the dog with a nearby garden hose. Sok did as he was told and the dog backed away from Kay.
Another highway worker, Dave Hoffman, hustled the dog into a cage while a third, Stewart Tibbetts, drove Kay to the hospital.
“You really have to give her credit with keeping her wits about her and directing Mr. Sok to put the hose on the dog,” said Lee. “All three of those highway worker should be commended for their quick action.”
Lee said the the adult male looked like a Labrador-pit bull mix, with the same barrel-chested, muscular features of a pit bull, only bigger.
Deputy Animal Control Officer Glen Thuot said the dog was familiar with Kay, who sometimes called him “Bubba” or “Daddy.” Although state law allows unclaimed dogs to be euthanized after as few as 10 days in a shelter, the dog had been living at the facility about two months after being picked up as a stray in the Fairmount section, according to Thuot.
“Now vets will not put down an animal that's healthy,” he said. “Your hands are kind of tied.”
The dog is still living at the shelter, said Thuot, but after attacking Kay, it will almost certainly be deemed unadoptable and euthanized.
Animal control officer for 12 years, Kay, ironically, has been at the center of an effort to ban pit bulls and pit-bull mixes from the city. Last year, she and Capt. Kenneth Paulhus of the Woonsocket Police Department, her supervisor, catalogued dozens of incidents in which the controversial breed was blamed for grisly attacks on people and their pets, including incidents in which victimized canines had been killed. No other breed in the city, they asserted, was responsible for more dog bites.
The report urged the City Council to adopt a law similar to that in effect in Pawtucket, which banned pit bulls about two years ago. Anyone who owned a pit bull before the law went into effect either had to obtain liability insurance on the animal as a condition of licensing it, or get rid of the animal.
The City Council took no action, though some members said the solution to the pit bull issue is enforcing animal control laws already on the books.
The term pit bull is actually a misnomer, since it is commonly used to refer to three different breeds recognized by the American Kennel Club – the American Pit Bull Terrier, American Staffordshire Terrier, and Staffordshire Bull Terrier. Some say the notion that the animals are predisposed to aggressive, unpredictable behavior is little more than a myth fueled by the popularity of pit bulls among a class of individuals who train them to fight, often in the service of illicit gambling operations. STUPID CITY COUNCIL.

May 27, 2010 FATALITY
http://www.eastbayri.com/detail/136112.html WARREN — A male pit bull savagely attacked and killed a much smaller Pomeranian dog outside a popular Warren dog grooming business early Saturday morning.Despite attempts by dog groomers and both owners to stop it, the attack in the parking lot outside the Animal House of Grooming at 654 Metacom Ave., severe wounds to the dog’s back and stomach area left the small male Pomeranian dead. Now town officials are investigating the incident and could call a vicious dog hearing to determine any penalties against the pit bull’s owner, Bristol resident AJ Giampietro. Mr. Giampietro owns Ace Towing in Warren.The attack occurred early Saturday morning as the pit bull was being led out of the business on a leash by Michele Giampietro, the owner’s wife. Police said the dog spotted the Pomeranian being led in by its owner, Bristol resident Donna Medeiros, and went after it. “The pit pull literally pulled Ms. Giampietro” in the Pomeranian’s direction, Lt. Joseph Loiselle said. “The pit bull bit and would not let go, pulling Ms. Giampietro, with Pomeranian in mouth, down Overhill Road.” The Pomeranian, too, was on a leash.Both owners and dog groomers tried to pull off the pit bull as it attacked the smaller dog but were not successful until after it had bitten into the Pomeranian’s back and stomach. The Pomeranian was rushed to the Warren Animal Hospital a short distance away, where it was pronounced dead.Animal Control Officer Heidi Garrity said she doesn’t know if a vicious dog hearing will be held. But if one is, she said, it will be the first in Warren in over a year.Under state law, any hearing would be held by representatives from the SPCA and the police and animal control departments. Both sides would be allowed to give testimony about the incident.Ms. Garrity said possible penalties range from forcing the owner to carry $100,000 in liability insurance to inserting tracking microchips, installing warning signs outside the owner’s home, requiring a six-sided enclosure, police notification when the owner moves, requiring a leash or muzzle whenever the animal leaves its owner’s property, requiring that it be spayed or neutered, and restrictions on selling or giving away the animal. The board can also call for euthanization.The pit bull is being quarantined at its owner’s home. Bristol requires that pit bulls carry liability insurance, and Lt. Loiselle said the Giampietros are in compliance with that Bristol law. AFTER THIS CLAIM, THEY WON'T BE IN COMPLIANCE, NO MORE INSURANCE FOR THESE NUTTERS.
Posted by HonestyHelps at 12:41 PM 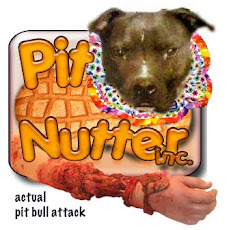